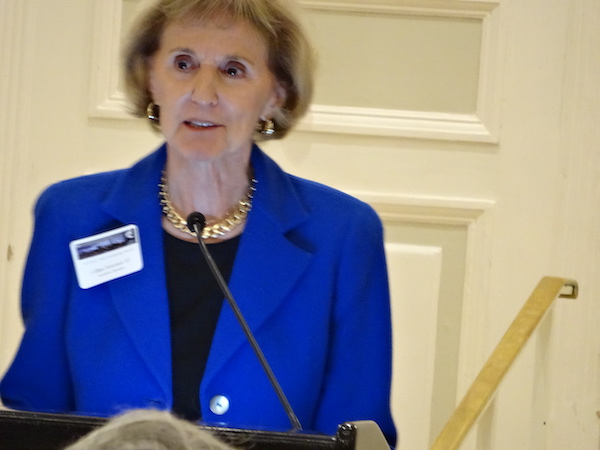 During our first Annual Benefit since 2019, over $40,000 was raised to provide financial aid to students from the Greater New York area.

The 30 minute talk, by keynote speaker Gillian Sorensen '63, outlined her years at Smith, her long career at the U.N., and the power of networking and fearlessly following one’s dreams.

After an introduction by Smith College Club of NYC president, Zaineb Hamdan '15, and a warm welcome by the club's Special Advisor and friend, Barbara Massey,  Gillian began by giving us a brief sketch of her years at Smith.

"I realize that it was truly a special place and I think that what I most learned, was how to learn; how to write, how to analyze and criticize in a constructive way. I feel as though I quite literally found my voice there."

Gillian was drawn to New York because she wanted to work and wanted to 'swim in a bigger pond'. She loved the diversity, energy and mix of languages in the city and found her first job in television production, but began participating in politics campaigns from the start.

During the 60's, NYC was very much a man's world. "Harassment was almost the norm . . . and you learned to cope." She met and married her husband, had a daughter and life continued until Ed Koch, when she latched onto his campaign for mayor.

After his election, the small size of his campaign team made it very easy for her to raise her hand for any position of interest and she became the NYC Commissioner for the United Nations and consulate. Her goal was "to build bridges, not walls" in this very international community and to address recurrent problems, resolve those issues, and help make NYC an "international capital of the world". With the mayor's support for over 12 years, Gillian accomplished much and become well-known in the U.N. community where she was eventually asked to come into the U.N. headquarters, the Secretariat.

Thus started a 32 year career at the U.N. where she met world leaders and heroes, such as Nelson Mandela. "I had an opportunity to observe leadership. What makes a person a leader?" she asked. "What makes a leader stand out? What are those qualities?" 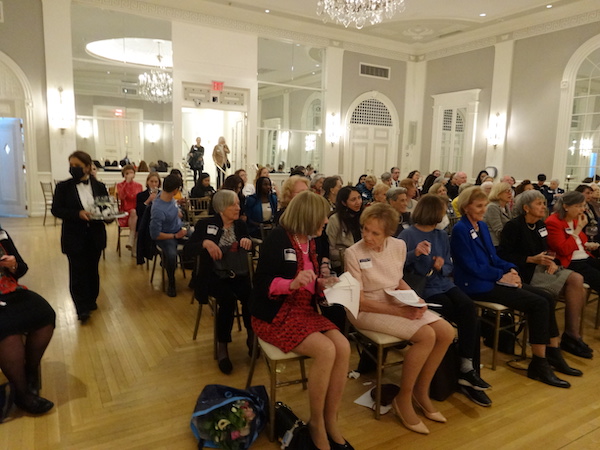 Gillian learned the most from Secretary General, Kofi Annan of Ghana, a career U.N. professional. "He had a combination of qualities of intellect, of focus, of discipline and hard work, of humility and warmth, in a very nice way, and genuine concern for his team." "I just watched that and I thought, that's, to me, the model of what a good leader should be."

Some of her responsibilities during this period were to extend the U.N. presence beyond the 'diplomatic bubble'. 'To engage more of the outside world, the business community, the academic world, religious leaders, civic leaders of all kind'. Gillian loved forging these connections and a lot of territory was covered in opening the U.N. to the larger world.

Gillian was 'self-educated' in the history of the U.N. and went on to give a little of that history - from it's foundation, coming from 'the ashes of war' in the effort to learn from the failures of the League of Nations and do better, to the building of the iconic United Nations plaza on land offered for free by the city of New York.

Her view is that the fundamental purpose of the organization is "the belief that we can do more together than we can do alone. That, if we have a global forum, nations would come together to address problems that cross boarders, without passports. It is in my view an expression of idealism without illusion." She went on to talk about the issues U.N. and the various departments has addressed from peace-keeping, medical aid, and human rights to climate change.

During the Trump years, the withdrawal and hostility from that presidency affected our standing in the international community. Senior and experienced people were fired and the former president's rhetoric inflammatory, and showed "no understanding whatsoever of the power of diplomacy, of the importance of words."
His narcissism and distain was felt around the world. Gillian's view is that during those 4 years the U.S. left a vacuum that was filled by China.

Things have improved under Biden, who shows that the U.N. wishes to lead again. This is not so easy , in her opinion, as we have lost our reputation and it "will take time to regain that respect of trust and credibility on the world stage."

"We must understand that, whatever our differences, the U.N. is an imperfect but indispensable institution. But without the U.S. it will falter and fail. We should build on its strengths as we address its weaknesses and join forces with others." Countries send their very best people to the U.N., even junior members who rise through the ranks.

Gillian continued to discuss the current issue of the Ukraine, where the U.N. is on the front lines of humanitarian, health, food, transport and information for the over 25 million refugees in the Ukraine and surrounding countries, and the constraints on the current Secretary General in playing a larger role in resolving the conflict.

The U.N. "may play a role in persuading Putin that victory is not possible and that Ukrainian neutrality will help keep Nato and the Ukraine separate and that's a positive end for all parties." In Gillian's view the Ukraine can thrive as a non-Nato country as many other countries do. The U.N. is also considering what to do if things spiral out of control, as well as, how to help restore the Ukraine, without forgetting the refugee crises in other parts of the world.

After her speech, Gillian answered questions about current peacekeeping missions, the evolution of the role of women and future female leaders within the U.N., and how the U.N. is addressing Covid, and she went on to explain what the WHO is doing to address COVID worldwide.

Gillian made the observation that if the U.N. needed to be created today, it would not happen. In 1945 it happened because of WWI an WWII and the subsequent commitment of the member states to make it work. They joined forces because of the shared belief that this had to happen.

"It is time for all of us in the American public to acknowledge the U.N.s achievements and recognize it for what it is and all that it has achieved over these 75 years."

Jacqueline Anderson '80, member of the SCCNYC board.

Scenes from the Annual Benefit 2022